The New Normal? Embrace the Madness?

Dear God, I certainly am worried about the direction the world is going. Today as I was driving home from work, around 10:00 headed north on I-5 in Lacey, I had to call 911. The car in front of me, in the middle lane, was all over the place! For a little while, I stayed behind to see if it was a momentary incident. The longer I watched, the more they traveled back and forth to both outside lanes. Cars on both sides were pulling far to the outside to speed past the car.

I figured rather than be behind the car if it hit something, I’d better race around and witness from in front. As I passed in the hammer lane, I could tell the passenger was a woman who was sound asleep. The driver was nodding off right behind her. As I passed, I pressed my horn to wake her up. It worked. She shook her head and grabbed the wheel.

Being in front, I thought I would keep an eye on them before I went my merry way. Within mere seconds, off she went again. I knew it was time to do my duty and hopefully, get her pulled over. The 911 operator transferred me to State Patrol, and I gave the play by play. I was unable to get the license plate because I flew by too fast. I did know it was a California plate. They appreciated the call and promised to check it out. During the call, I passed two State Patrol vehicles on the side of the road. One of them didn’t have anyone pulled over.

As I continued to stay just a few car lengths in front of her, they continued to swerve and sway. Cars were dodging them left and right. Soon, she pulled over to the slow lane and from the looks of it, I think she fell asleep! The car fell out of site within seconds. She must have dropped back to under 30 mph. At least I was glad I gave the description of the car, so if there was an accident, they had at least one report on file.

A few miles down the road, I see a silver SUV flying up in the hammer lane to the left of my car. Cars were getting out of its way because it was going at least 75 miles an hour. I’ll be darned; it was the sleepy lady! What in the heck is she doing? I figured she drove from California, and somehow she just woke up and realized she had something she had to do asap. Fortunately, this time, I was able to record her license number in an audio file as she sped by. Not too much further down the road, I was happy to see her exit at Joint Base Lewis McCord. Whew!

What got me thinking is… I think I am the only one on the 15+ miles stretch that reported her. She was bobbing and weaving for miles and miles. All the other cars did was swing wide to avoid her. Is this the new normal? Do we just embrace the madness? Are we just accepting that people will be sleeping, intoxicated, distracted or high?

Here’s a link to another short “don’t text and drive” video. Maybe this one will make a difference?

When I drive to Seattle or Olympia, on all the freeways I drive on, I see people with their heads down. You can tell they are busy on their phone or updating their status on Facebook. I have to believe this is the way it is going to stay. Nothing we can say or do is changing the way people think. So far, my daughter wouldn’t consider touching her phone… right Hannah?

What can we do to stop this? I know in Oregon they have a law which says you can’t even be touching your phone. Using the speaker or Siri is clearly not acceptable like it is in Washington. Is that helping? I don’t know. Every time we are in Oregon, I see people on the phone, same as where we are. Ideas? I would love to hear them.

When we went on a spring break trip to Florida, John reserved the rental car. You can only imagine how scared I was when I saw we would be moving around at 60+ mph in a pop can! Good thing we didn’t have much luggage! 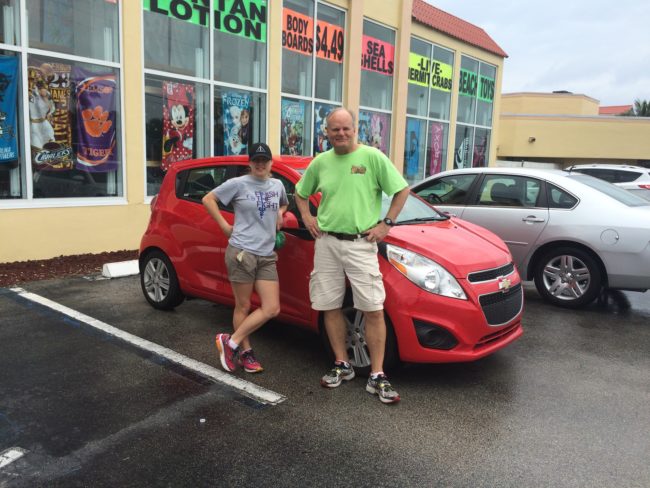 I just saw this on Facebook today. I know it won’t change the mind of even one person, but you know what, someone literally lost their head over using their phone in the car. Pass it on! 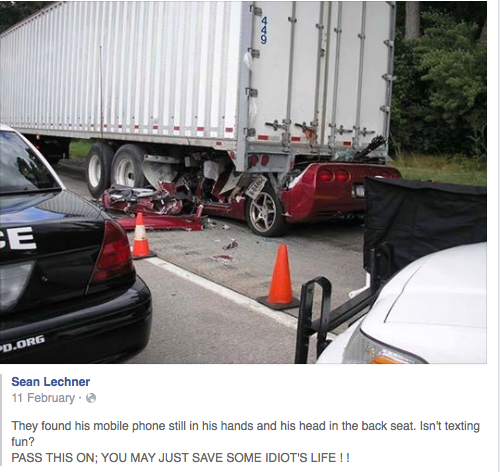