Coming back from the Hay House Workshop on the Alaska cruise, I was in a similar spiritual place from when I returned from the Grand Canyon. Removing yourself from life and being only “in the moment” day after day, brings high rewards and crystal clear thinking. Once you’ve experienced the Grand Canyon from the river for 18 days, you will never be the same. You won’t want to be the same.

The Grand Canyon trip was a last-minute opportunity in the summer of 1994. I had a pen-pal/friend (Tony) in Montana, who with a group of 15 others, were heading for an 18-day adventure in the canyon. Three weeks before the trip (they waited nine years to get permitted for), one of the couples had to back out. Tony knew from our conversations that this was an experience I had dreamed about; when they had the opening, they came to me to see if I would be able to pull it off. Are you kidding me? Hell yes!

I was living in Ohio, and the trip started in Arizona. Since I would be gone almost a month, I had three weeks to get my affairs in order, buy equipment and plan my flights. I would fly to Las Vegas, visit my family then take a bus to Arizona. Floating the canyon was the most exciting trip I’d ever had on the books; I couldn’t wait to meet everyone and begin the journey.

The last bit of news I heard before dipping down into the canyon was about O.J. Simpson and a slow police chase in a white Bronco. From this moment forward, I would have no idea what was going on in the world, and the thought was incredible. Time to just “be” and live in the present moment.

When I arrived at the put-in with the outfitter that packed our coolers, every guy on the trip, one by one, came up and introduced themselves as Tony. It was hilarious, but I knew I would be able to recognize the guy with the heavy Italian name. We spent the first night at the put-in then headed out first thing to tackle 18 days, 225 miles and 189 rapids. 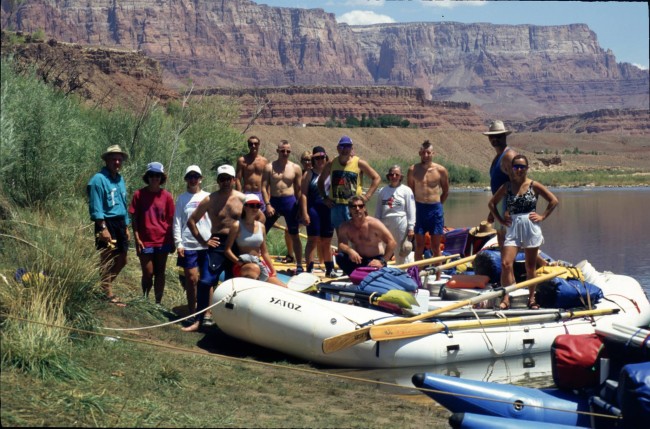 “How did you go to the bathroom” is a question often asked. The boat that carried the garbage also carried “D” Can. It was a big, box with a hole in it and a lid. The big, strong men would carry it up a hill to find a scenic location surrounded by shrubs if possible. When you were going to use the toilet, you would remove the bandana from the branch on the tree heading to it and take it with you. When you finished your business, you tied the bandana back on the branch showing the facility was free.

Early in the trip while running through a rapid that was very mild in comparison, two of our rafts flipped. In addition to the men rowing, there were two women on the rafts in their 60’s and a girl of 16. You could see the fear on their faces as they casually floated down the river. With the help of other boats floating behind us, they were able to fetch the swimmers and bring them back to our side of the river. Meanwhile, we were able to upright the rafts and tied everything back down. When they came back, you could feel the borderline panic they were all experiencing. It was at that moment when I felt a calm come over me like I’d never experienced; I suddenly became one with the river. I understood nature and the risks she brings. Being thrown in the river was now something I was excited about, knowing it could and hoped it would happen.

During the 18 days, we spent an extra day at two of the camps so we could explore and hike around. We walked along hills where native Americans paved the way hundreds of years before. There was beauty you have to see to believe.

The group all came from Montana, except me. They were members of rafting and kayaking clubs. On the trip we had Doc, it’s always good to have a doctor, and we had two nurses. Having a doctor came in handy one morning when I slept outside on a sheet as it was so hot in the tent. When I awoke, I started to scream as I heard a horrific sound, and it was driving me insane! Noticing that no one else in the group was going crazy, I realized it must have been only me hearing it. Doc ran up and sat me down, turning me on my side. He began massaging my ear and not long after, a beetle came walking out of my ear. I will never forget the sound of a bug marching around in my head!

Before we would pack up our gear each morning, and tied down the rafts, everyone had to make sure they shook out their sleeping bags, so scorpions didn’t follow us down the river. The process of tying down the rafts became an art as we gained valuable experience with rafts flipping on what stayed in place and what flew out of the boat. Each of us had a big bag where we sealed our personal supplies; you would squeeze the air out of it and make sure you had a good seal to keep your stuff dry.

Rapid by rapid, boats flipping time and time again, we made our way down the river. The Colorado River merges with another river early on, and the water then becomes the shade of chocolate milk. You live in this dirty water for the majority of the trip. You are dirty when you leave the canyon, there is nothing you can do about it. My hair looked like I lived in caves all of my life, and you could carve your name in the dirt on my body. I loved it.

The final large rapid we encountered was the one used to measure all national rapids. On a scale of 1 to 10, it is the mother of all 10’s! At the time, it had a 38′ drop. The normal pattern is for the guides and kayakers to study the “line” (the way the current goes) and determine which way was best for them to go. “Scouting the rapid” is done from the high ground before any rapid higher than a 4 or 5 on the scale. 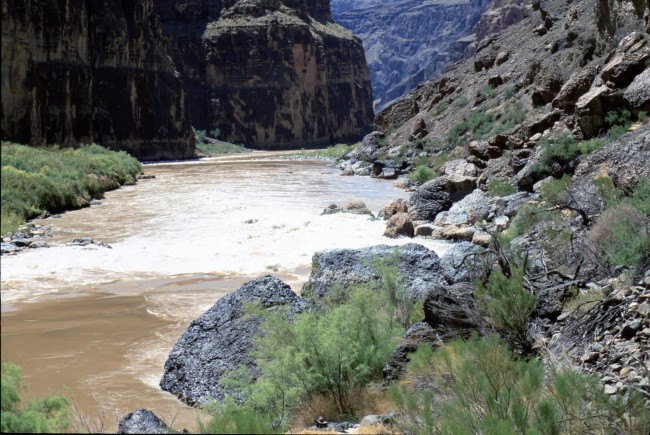 The kayakers went first while we (the rafters) filmed their ride. Other than Jesse (who was an incredibly skilled kayaker), every one of the kayaks flipped and the driver had to bail out. Once they finished their ride, some of them came back to film the rafters as we attempted our journey. 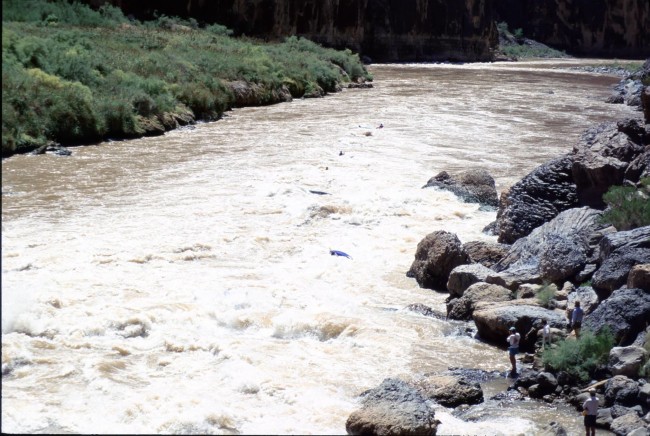 Harold and his pontoon raft went first. He followed the line to a “T” and went through unscathed. Doc survived the ride upright, barely. Ward, the new guy to rafting (I can’t believe he took on the role of guide for a trip like this) flipped. Again. Last up was me and Tony. I decided to stand up for this joy ride, riding rodeo as we called it, holding the rope. I’m so glad we captured the footage because what I experienced and what I saw on the tape seemed so different.

As we turned the corner and approached the very top of the rapid, our boat quickly turned completely on its side and then straightened out, boom, boom. It was microseconds on the video. The experience I had seemed to last a long time. I felt the boat tip. I had time to think as I let go of the rope. I pushed myself away from the side of the raft so that I wouldn’t get pinned down, and off I floated. I recalled being under crazily churning water but continued looking up. When I saw the surface nearing, I knew to prepare for a deep breath each time. What seemed like at least five minutes in my world was all in just seconds on the video. I swam Lava Falls! It was exhilarating!

It took a while for Tony to come back to the surface. He got stuck in a hole where he was turned and churned for quite some time. In the process, he lost his shoes, hat and glasses but he was alive. Everyone was scared as it took so long for him to be spit out. No one was as afraid as Tony. He didn’t know if he would make it out before he ran out of air.

After Lava Falls, you have a party. You have conquered the Colorado River. From here there would be minor rapids for a few days. For the final nights, we turned camping into partying. There was no more pressure of huge rapids to navigate. We had costume night, making the best costume out of what you had with you. I put my hair in pigtails, wore overall shorts, a red bandana around my neck and had a black sunflower shell on my tooth. A hillbilly! We had Wilma and Fred Flintstone; Bruce wore a Harley Davidson scarf as a diaper. It was “anything goes”. 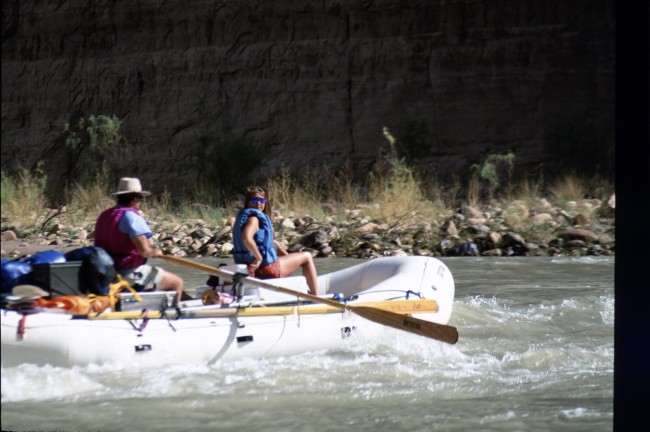 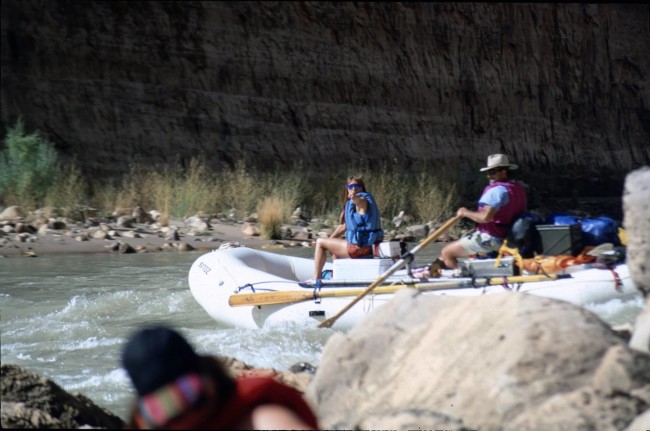 Life of leisure in the Grand Canyon

Those last nights we played games I had never seen, heard of or played before. We played butt darts, around the paddle and many more, all while enjoying my first tastes of Jagermeister!

What a great group of people who all came together with one huge thing in common, the love of rafting. It was my first rafting experience, so the bar was set pretty darned high moving forward. I couldn’t believe how fortunate I was to be included in this once-in-a-lifetime adventure.

When an opportunity knocks on the door for you as this one did for me, you’ve got to jump on it. Not taking risks is safe and very comfortable but it won’t expand your horizons. Jumping off a cliff just to see what might happen will be the most uncomfortable thing you will ever do, but it will bring to you a whole new perspective. It will bring you life!

Get outside of your comfort zone. Go do something crazy. I suggest The Grand Canyon. Live. Experience. Try. Do.