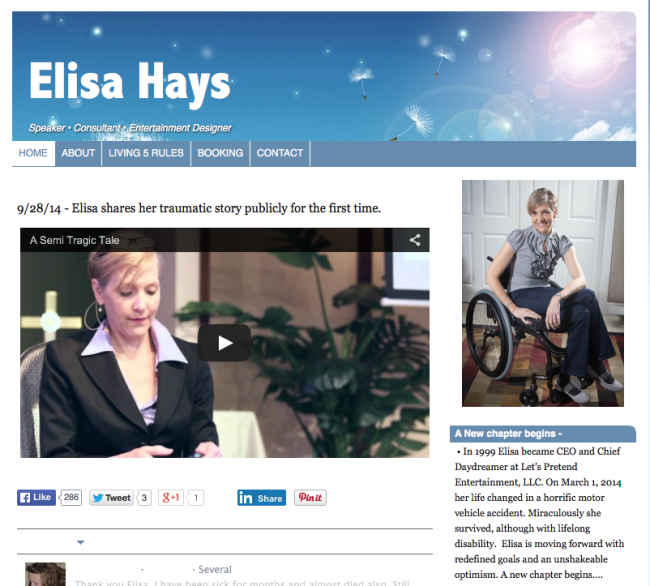 Going back to January, in my email like every other day, was a Linkedin connection. I clicked on it and like every other time, there is a page full of suggested connections. Often they are people I worked with in radio before; many are in parallel careers or just random links. On this particular day, there was a suggestion that drew me in immediately. She had Motivational Speaker as her career; that is the direction I am heading. I quickly clicked on her name.

Her story was tragic. She had been in a terrible accident after spinning out on black ice; a semi slammed into her car. She was lucky to be alive. I saw pictures of her in the hospital; clearly her time was not meant to be up on our planet.

I wrote a Linkedin message to her and introduced myself. I told her I was changing the direction in my life and writing my story. After I’ve written it all, I want to share it with the world and maybe impact the life of someone else. After her accident, she was doing just that. She gave me suggestions about good ways to connect with other speakers and get myself noticed.

We both said it would be great if we were to meet in person one day; knowing full well the odds of us meeting were slim to none. With the large continent we live on and having no idea where she lived, I knew it wouldn’t happen.

In February, I learned that many speakers got their start just by attending Toastmasters meetings and learned to hone in on their craft. I found a few meetings near my house and put them on my phone calendar. Part of me thought it would be taking me back to square one because I had already spent a lot of time on stage, so I hesitated.

On Monday of this week, I decided I was going to attend a meeting and see what it was all about and if it would be a fit. The Thursday group looked good as the time worked and the location was nearby. When Thursday morning rolled around, I took my shower early so I knew I would be ready for the meeting. I tried calling the number on the website, but it went straight to voicemail. I was hoping to learn a little more about it before I went to the meeting.

Oh well, not knowing what to expect, at 11:50 I drove myself to the real estate office where they held their meetings. I walked in and was overwhelmed by the greetings and friendly people. I sat down and watched the meeting unfold.

They had one person get up and do a speech, and she was remarkable. Turns out she is a long time member and today would be the first day her peers learned she was going through chemotherapy. You could see the sadness in their eyes, but her strength was contagious.

For the next agenda step, a man threw out a topic then called members to come up and do an impromptu speech about the topic. Five of the members went, one at a time until they covered all of the categories. One of the women that got up to speak was remarkable. She was talking about her favorite comedy/scary movie and threw in a fun English accent. She was a natural.

When the meeting was over, I visited with a few of the members to learn a little more about how it works. The Toastmaster asked what I thought and if I was ready to join. I immediately said,”yes.” I could feel a good energy in the room, and I knew it would be the perfect group of peers as I launch my new business. One of the men already wrote and published five books. Another man was publishing his first right now.

Next I heard the woman that used the English accent talking to the Toastmaster about a speech she did over the weekend. She was using a cane to walk, and I heard her reference, “being hit by a truck”. I was listening in as I was sharing stories about my life to those that asked. When she finished chatting with the Toastmaster, we were introduced. She was already working as a motivational speaker and joined this branch of Toastmasters just three weeks ago. I could see this branch was going to be a great fit for me.

As all of the others left the room, I continued to chat with her. Something about her was familiar. She looked familiar for sure, but there was something else that I couldn’t put my finger on, and I couldn’t figure it out. We were kind of staring at each other when I said, “are you the woman I sent a message to on Linkedin?” She smiled and told me it was her; she thought she recognized me but thought there’s no way it could be me.

She spoke to me about the National Speakers Association and recommended I get involved with them, just like in our message exchange. I told her I looked into it, but it seemed to be quite expensive and nothing near the area. The more we talked, the more I realized I needed to give the NSA another look. She handed me her card and told me to send her an email, she would then send me information about NSA and could help get me started.

As I left and sat in my car, I pulled out her card and all of the ironic pieces fell right into place. I just connected with the woman that I never thought I would run into from Linkedin from back in January. Now, not only was she at the same meeting I went to for my very first time, it turns out, she lives not far from me and our teenage daughters went to elementary school together!

Was this another cosmic encounter or an accident? I’ve had too many of these throughout my life to even entertain the accident option. This is just how I roll.