Is Man Ruining his own Nest 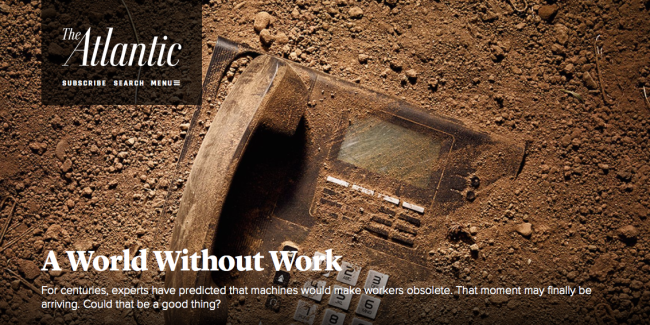 Is man ruining his own nest? I recently read an article in The Atlantic magazine that can’t help but make you think about the future. The article was titled “A World Without Work,” and it’s about how with technology, man is inventing himself into unemployment. Wow! Think about this. We’ve been dreaming for decades about ways to make our lives easier, simpler, right? Plain and simple, in doing so we are taking away our own jobs.

In 1995, the company I worked for offered me a relocation from Ohio to Washington. It was a promotion, and I was more than ready to leave Ohio. Before I left Ohio, I found it entertaining to scan through the “Help Wanted” section of the classified ads in the newspaper. In Ohio, there were pages and pages full of jobs working in the many factories. The majority of the population in Ohio were born and raised to carry on the family tradition of working in the local factory. Through all the generations, they would have never expected to have their jobs replaced by robots. When I moved to Washington, again I would scan the help wanted section. In Washington, it was quite the opposite. Rather than jobs available in manufacturing, the positions in Washington were for high-tech positions. The people in Washington were inventing people in Ohio right out of their jobs.

I left Ohio in 1995. Since 2000, the number of manufacturing jobs in the country has fallen by almost 5 million, or about 30 percent. I have no idea what life in Ohio is like now. I can only imagine it must be very depressed as labor was the number one job for the majority of the population.

I was so interested in the article that I did a speech about it last Thursday for my Toastmasters group; I had to share this information. I could tell by the looks on the faces during the meeting that most people aren’t processing what this new world of technology will look like one or two decades down the road. It is downright scary.

If you think about it, every day you hear of something new we can do with technology. You can use a 3D printer to print out an Oreo cookie or even a new heart valve. A patient can now have a new heart valve put in surgically by a robot rather than a doctor. You can get your fast food order filled by a robot. In Washington, fast food workers are fighting for $15 an hour. I hope they realize that soon that job they hoped to make more money at will be soon be replaced by a robot! Robots will never ask for a pay raise.

I can’t tell you the last time I saw a teller at a bank. I pay all of our bills online and deposit all of our checks with my phone. Does the bank still employ tellers?

The United States Postal Service is holding on for dear life as it is right now. Once drones start delivering packages to our doorsteps, certainly it will be the end of mail as we know it today.

Not long ago taxi drivers were threatened by Uber. With a simple app on your phone, you could get an Uber driver to pick you up and get you wherever you needed to go. In the not so distant future, both Uber and taxi drivers will be without work as the driverless car will be replacing them as well. Will we have driverless semi trucks? Why not?

Hotel and motel guests are now using airbnb to find a place to stay. Homeowners can rent out all or part of their homes or apartments to make extra money. Airbnb has cut into the hotel/motel money pie. 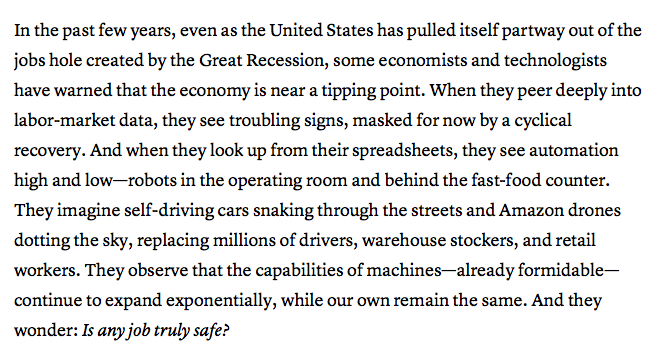 I have a child who will be full on in the workforce in the next decade. I can’t help but wonder what the world will look like for her and her children. All they can do now is get as much education as they can and be ready for any future scenario.

I’ve been telling her all along that she needs to figure out what her natural talents are; what is her gift in life. With this gift, she needs to use it to make her living. If you are doing what you love for work, it will never feel like going to work. You will never need to or think about retiring because you wouldn’t need to retire from a labor of love. If you follow your passion, abundance will follow.

Our planet has become obsessed with kids going to college then getting “a job” where they can clock in and out. It doesn’t make any sense to me! Why would anyone want to do a 9 to 5 where they are making someone else money, and be miserable with the whole process? If we change how young people approach their working futures, we can change the world. Figure out what it is you love to do, then do it! I guarantee there is a way to turn any passion into a career.

When I started paving my new pathway and began working on the air in radio, on a daily basis I would have to pinch myself because here I was getting paid… to talk! It was something I loved to do, and it was natural for me. I made good money – to talk!

Figure out what your skill or talent is and make it into your career. With that, you will be living the dream. When you think about it, we shouldn’t live to work, we should only work to live. If we love our work, then we are merely doing what we love and getting paid for it. If the world is in fact changing because of technology and the “normal” jobs are going away, just focus on doing what you love and being who you are. In the new world we will live in, without such employment, there will always be room for us to bring our natural gift to the surface.

Here is a link to the article in The Atlantic magazine. 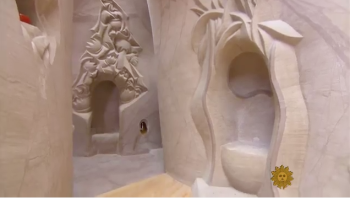 I bet this man was either the best at building sand castles when he was a kid or he loved to build forts. Check out this video with him making unbelievable caves in New Mexico sandstone. He is doing what he loves.