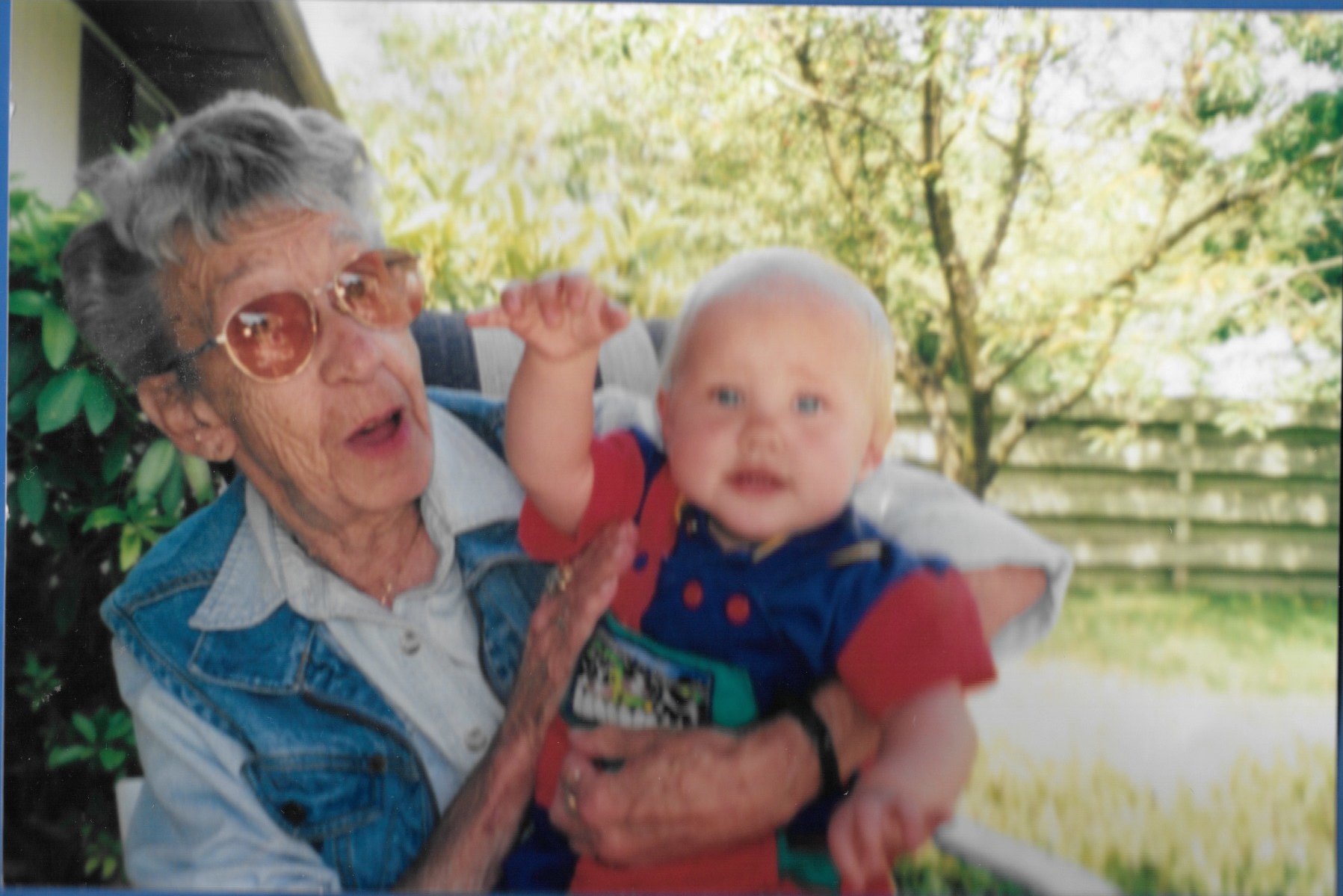 As everyone is posting their beautiful stories and pictures on Facebook about their mother being the best in the world, I can’t say the same about mine. There was a time if I could go way back, where I might feel different. Unfortunately, the choices she made changed our entire family dynamic forever. I won’t wish my mother “happy Mother’s Day”.

While growing up living the result of her many bad decisions, we had a great relationship. During my years as a teenager, she was known as the “cool” mom. We seemed to have more of a “friendship” relationship than parent/child but she was still pretty stern, and you didn’t question her. When she said, “no,” we knew it meant “NO”! You didn’t ever go back answer shopping in hopes of a changed mind.

When I was in sixth grade, my life finally started looking like what some might call “normal”. Before that, from birth through fifth grade, we would live in complete chaos. She married five times; the first four men were alcoholics and very abusive; to her and us. Until sixth grade, it was all we knew. It was our normal.

I recall an overwhelming feeling that came over me when I was preparing to leave home after high school. My two older sisters already moved out so I was the last one to leave. The thought was, “when I leave home, who is going to take care of my mother”! What kind of sick thought was this? I should never have to feel that way. She was happily living with husband number five, why would I feel compelled to think that?

Well, it’s because my mother, husband or not, had never been able to take care of herself. Whenever her husband of the day beat her, threw her out or when it was time for her to leave, off to grandma and grandpa’s place we would go. Whenever she needed to be rescued, she would call her mother. She never stood on her own two feet. Ever.

Still. She was my mother, and I loved her. I came from her; I had to love her no matter what, right?

My grandma would need to have heart surgery. My mother offered for her to live with her after the operation and then she would set her up with an apartment in the complex she managed with her fifth husband. It would be directly across from hers, just a sidewalk away.

Fast forward a year or so. While visiting with my grandma, my sister asked who was taking care of her banking. When she realized no one was, she offered to take all of the bank statements and balance her checkbook. My grandma was thrilled at the offer; she had no idea what her finances looked like or how much money she had left.

After she had done the math, my sister showed my grandma that she had about $300 in her checking account; that was it! My grandma was shocked as she received a big lump sum of money when my grandpa died. She didn’t live any form of a lavish lifestyle so there was no possible way she could be broke. My sister showed her the bank statements with most of the money gone due to ATM withdrawals from the casino down the street with her debit card. Grandma told my sister she never used the debit card. She didn’t even know how.

The entire time we lived in Nevada, my mother had zero interest in gambling. Once we all left home and they moved to manage an apartment complex in Las Vegas, gambling became my mother’s new best friend. How convenient that they happened to move right down the street from a casino.

We knew now she would go to the casino frequently, on occasion she would take grandma with her when she was up to it. Her favorite thing to do was to sit at the video keno machine and plop nickels in it all night long. On the rare occasion, she would come home and tell daddy number five she won. No one ever knew where the money she lost came from; until now.

My mother gambled away my grandmother’s entire savings. She left her with $300 to live on, and that was it. As expected, she took no responsibility for any of it and blamed her mother for the missing money. We all knew better.

I was dating the man I am now married to and I brought him to Las Vegas to meet my family. I heard the rumblings of the money situation but hadn’t been there to experience the outcome. When we got to my mom’s smoke filled apartment for the introduction, there was a frost in her veins I had never felt before. It was the most awkward and unwelcome feeling she’d ever given off. This meeting would be the only time my husband would meet her, and the last time I would ever see my mother.

With all of the horrible mistakes she made by picking the men that would damage us for life, she would never own any of them. Once she put them behind her, we weren’t even allowed to bring them up. Ever. Once she moved on from whatever mistake she made, we were supposed to move on. It doesn’t work that way, unfortunately.

Time moved on and so did grandma. One of her nieces, Trudy moved her in, so she would be taken care of, and she took wonderful care of her. We were all so grateful she had a great place to spend her final years. They were together for awhile in Washington; a few years later they moved to Arizona so they could be with her sister’s and Trudy’s mother in the warm climate.

Trudy called me to tell me that grandma had taken ill and that she was hoping I could get in touch with my mother and try to convince her to call her mother. Even though my mother left her penniless and took advantage of her goodness more times than I can stand, my grandmother never disowned her for any of it. She still loved her daughter and wanted to see her. She held no anger and wanted my mother to know it.

I found my mother’s phone number and called her. She knew it was me by the caller ID. Just like the last time I saw her ten years before, she had the same ice in her veins. We didn’t even exchange pleasantries nor did she ask one word about the granddaughter she never met, it was just cold.

I had a message on Facebook from my niece telling me that my mother was sick with some form of cancer, in the hospital and not doing well. I was surprised I didn’t get this message long before as she smoked about three packs of cigarettes a day every day that I knew her. She insisted that I reach out to my mother and catch the first flight to Las Vegas. I wrote back to my niece that I appreciated her reaching out, but I had mourned the death of my mother ten years before. She made a choice to not face the music and own what she did to her mother. She chose to cut my sister and I out of her life permanently.

For my sister, I felt horrible about it. She had two young children that up until that time; they had a grandmother. She cut them out of her life without hesitation or regret. How are little kids supposed to understand why they don’t get to see grandma anymore?

When my daughter was about 5, she asked me where the grandma from my side was. I was honest with her. I told her she had a grandma, but she would never meet her. I explained it in the best way I could to a child at that age. Luckily, she never met her so she had nothing to miss.

You can’t pick your family. You don’t have to live in the circle of chaos and dysfunction. Never once did I fight my mother’s decision to cut us out. It was her choice, and it was her loss. She never got to meet my daughter, an amazing girl that is being raised in as close to a “normal” family as we can provide.

I’m so glad I have this picture of Hannah with her grandma. 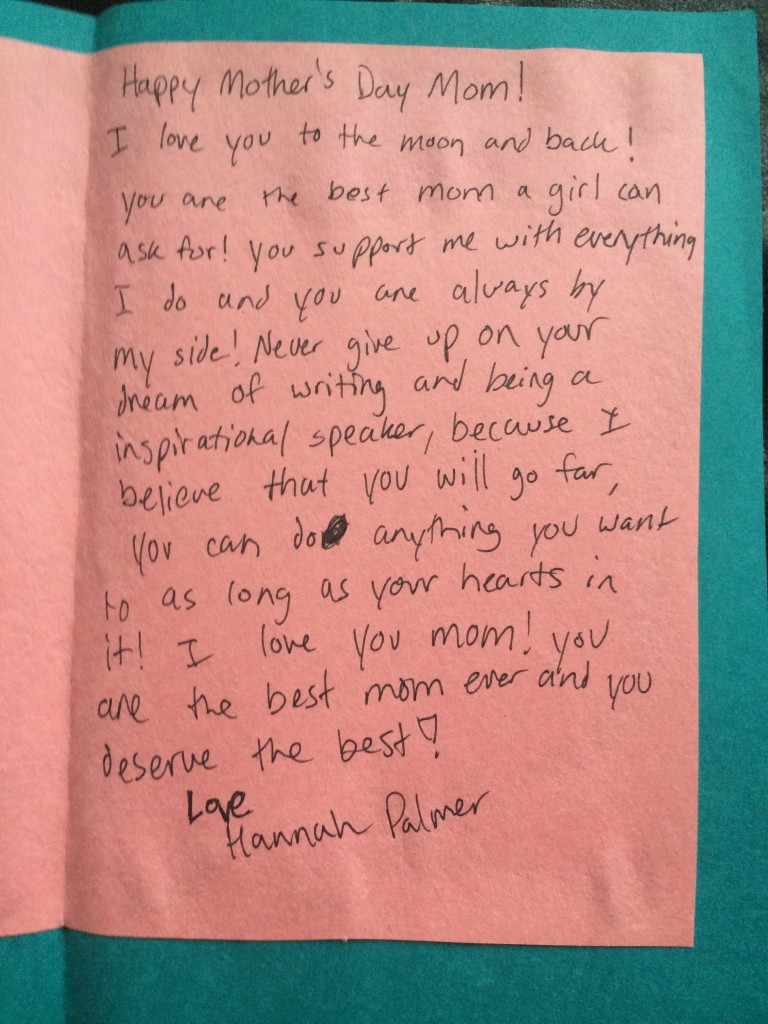 And this is what I got from my girl today. It brought tears to my eyes.