My Former Step-Son in Jail for Kidnapping

Well if this isn’t living proof that kids need parents to actually “parent” them, I don’t know what is! Listen up grown-ups, if you are divorced and feel guilty because your child isn’t in the perfect two-parent home you dreamed of, stay awake and present because those kids still need you!

I’ve previously posted an article “Letter to my Ex-Husband” where I truly was thankful that I landed on that broken road as described. It was because I ended up with him that my next steps in life took place. Had I not found my way to Ohio, I guarantee I would have ended up dead.

When I married my ex, he had two children. A three-year-old and an eleven-year-old, both boys. He divorced because his wife (mother of his kids), was having an affair with his sister’s husband. Both of the siblings divorced over the infidelity.

When we married, words can’t even describe how insecure he was. He simply knew that I would cheat on him, it was a matter of time. No, I never could nor would cheat. I had to remind him every day yet somehow; he would never believe me. He was a very damaged man.

Because he felt such guilt over the breaking of his family, he spoiled his kids rotten. Whatever the kids wanted, the kids got. He honestly never said the word “no” to his boys. I saw the writing on the wall on how this would look down the road for them. He never listened.

The mother had the oldest boy medicated on Ritalin for ADHD. Because the dad didn’t like what the medicine did to his boy, when we picked him up every other weekend, he refused to give it to him. Eric would go from a quiet boy with his head hung down until the medicine would wear off. After that, he was bouncing off the walls.

Not even a year after we married, the mother couldn’t take care of (handle) the oldest any longer, so she gave up custody to the dad; yes that means me – full-time step-mom!

Over the 4.5 years I would be in the house full time with this child, I saw his life spiraling downhill, yet his dad refused to listen.

The first Christmas was very telling. As I just married their dad and moved in weeks before the holiday, I got to see first hand how he was operating. For only two young boys, the tree runneth over with packages! On Christmas morning, one by one, they ripped through each package and immediately after opening each gift, with a grunt they would toss them behind and start tearing into the next box. Not so much as a “thank you” left their lips that Christmas morning.

I was in the shower, with the door locked, because that is the only way I would ever shower. While washing my hair, I looked up to see an eleven-year-old boy’s head above the shower curtain, watching me. Because of my sexual abuse history, I freaked out! For about ten minutes my husband was supportive and sorry for what had happened. At about eleven minutes, he started questioning that the door was actually locked. From there, he discounted the whole thing to childhood curiosity. I saw the look in Eric’s eyes. I never let him come up and give me the loving bear hugs ever again. I knew there was going to be trouble with this boy.

Eric came home from high school, and I saw he had a pipe. He danced around what it was for but I wasn’t born yesterday, I knew how to recognize a pipe. When his dad got home, I showed it to him; he was quite angry. He screamed and yelled about doing drugs and promised Eric he would be taking him to the local jail and let him witness the “scared straight” program immediately. Within an hour or two, the dad was convinced that it merely was just a whistle. He didn’t get in trouble.

Just a few other examples of life with Eric:

When I was working full time and suggested the boys take on some of the household chores, their dad got one inch from my face and screamed that no boys of his would ever do housework.

My sweet, white German shepherd was scared to death of Eric. Every time the dog was left alone with him, when I would return, the dog would run to me, tail between her legs. She showed incredible fear. The dad refused to see it.

When Eric was getting a little older and as a step-parent, I became afraid for my life because stories were all over the news about kids killing parents. Without question, Craig put a lock on our bedroom door for protection. We locked it every night at bedtime.

Knowing we had no control over Eric, Craig agreed that we should attend a Tough-Love meeting. At the meeting, we learned so many valuable lessons about how we can best raise this child. The following day, Craig realized giving boundaries and tough-love to a kid was too harsh.

Eric told kids on an adjacent bus that he knew how to get them drugs. The school suspended him for three days. He didn’t get in trouble.

Craig and I were watching television on a typical, boring Ohio night. 15 1/2-year-old Eric came in, leaning on the kitchen wall and said, “Dad, can you take me to Tami’s house?” Without hesitation, Craig said, “no!” It was at that very moment when Eric and I looked at each other, both not sure what just happened! In all the years I had been married to Craig, this was the first time he ever said the word “no” to either one of his kids. I didn’t know what to think!

The next morning, I walked to the kitchen and immediately saw what Eric thought about his dad telling him “no!” During the night, Eric took a butcher knife and destroyed every cupboard in the kitchen. Wood shrapnel was everywhere. He didn’t get in trouble.

Over the last few years, I have been contacted by social services in Ohio asking if I was available to help with Eric’s children because he would be unavailable for some time. Each time they call me, I happily remind them that I am no longer married to his dad. When they hear this, they quickly apologize and hang up.

Today one of my dear friends from Ohio reached out to me through Facebook. She said she was watching TV and when a story came on, she fell off of her couch. Apparently the child with so much promise (yes, I’m being totally facetious) has been arrested for kidnapping and rape. Seriously? I am not surprised one little bit. Here is the link to the article. My former step-son is in jail for kidnapping. 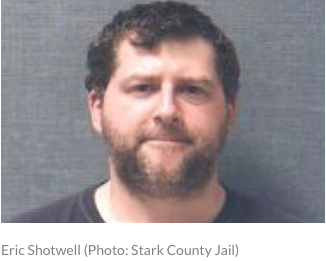 It really does make me sad because I saw the damage being done to these kids on a daily basis. No matter what is happening in your big boy or girl adult panties, you need to put those kids first. Give them consequences and give them boundaries. They are only kids for such a short time. Let them know that life isn’t always easy nor is it fair. Life is hard. The more you experience reality and have great lessons from parents that love you, the more prepared will be to enter the big, scary world as an adult.